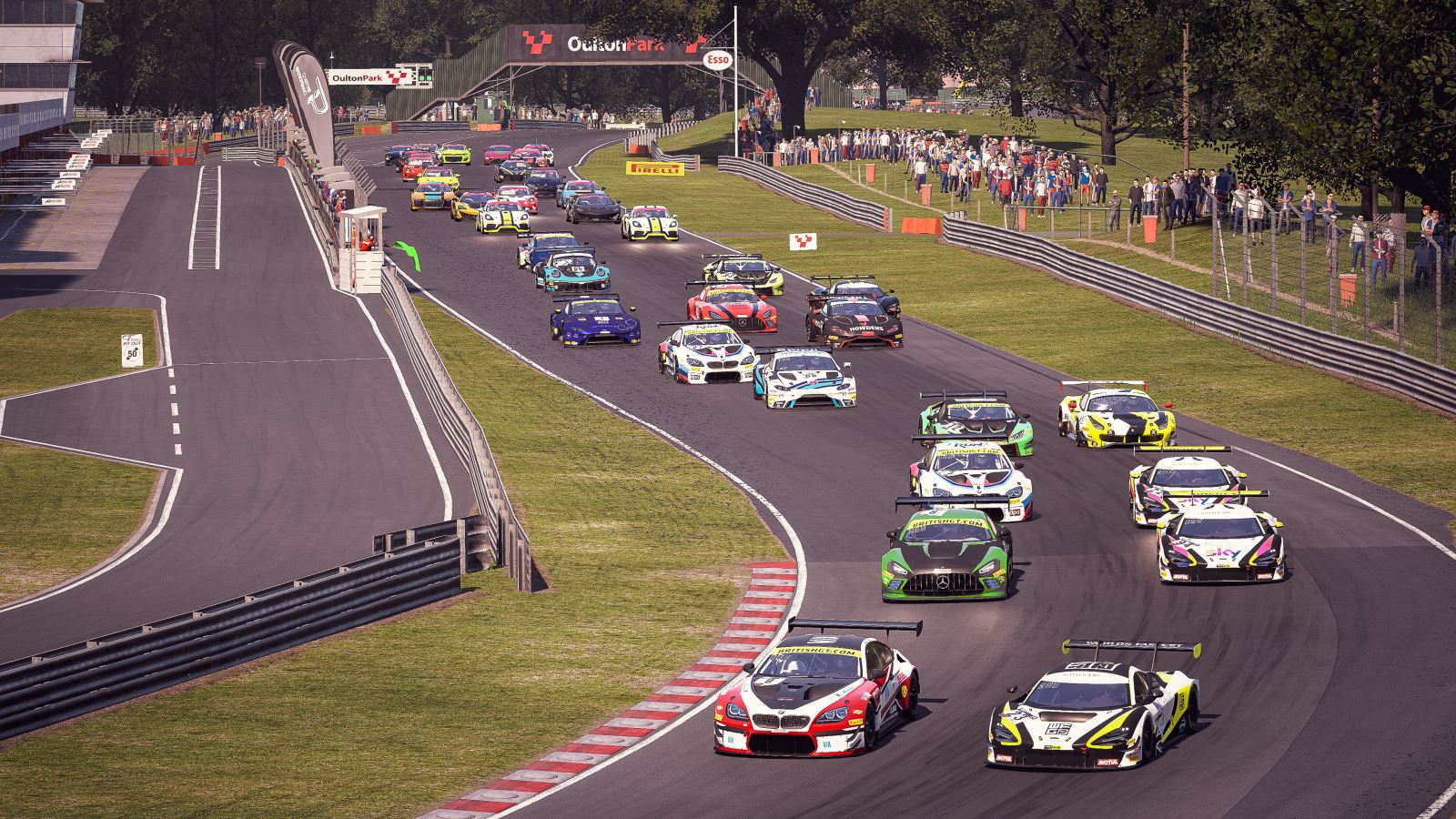 Esports poles and victories for Fender and Berk at Oulton

A race-long battle between Angus Fender and James Baldwin was ultimately decided in the stewards’ office where a 30s post-race penalty for The World’s Fastest Gamer handed Century Motorsport’s BMW victory in the opening round of this season’s British GT Esports Championship at Oulton Park on Sunday evening (March 21).

Team Rocket RJN’s McLaren took the chequered flag first but was stripped of victory for moving under braking into Hislop’s, which forced Fender into evasive action while challenging for the lead.

The 30s penalty in lieu of a drive-through wasn’t enough to further elevate JMW Motorsport’s Ferrari driven by Jody Fannin who completed the podium after fighting through from eighth on the grid.

GT4 also went the way of its class pole-winner, Luka Berk, albeit in more straightforward fashion. Zansho Rocket Simsport’s Porsches ran one-two in the opening stint after Jack McIntyre jumped his team-mate at the start, but it was Berk who found himself back ahead after the pitstops.

On paper, at least, James Baldwin should have won this race. That he didn’t owed much to Angus Fender’s relentless pace and a controversial moment with 15 minutes remaining. Indeed, after qualifying on pole by half-a-second and re-taking the lead halfway around lap one it was Fender who looked the most likely winner.

Baldwin, though, was never far away and remained in close contact with the M6 before the pit window opened on 25 minutes. The McLaren appeared notably faster after the stops and cruised onto Fender’s tail as the pair negotiated traffic.

Baldwin’s pass for the lead, coming with 19 minutes remaining, was typically ballsy, The World’s Fastest Gamer showing all of his sim racing nous by pouncing on the slightly compromised BMW as both headed out of Knickerbrook and up Clay Hill.

Fender wasn’t finished, though, and regrouped before lining up a move into Hislop’s. The BMW was alongside when Baldwin’s attempt at closing the door led to contact but no change of position. That was until moments after the race, which Baldwin completed eight seconds clear of Fender, when stewards imposed a 30s penalty in lieu of a drive-through for making avoidable contact.

Jody Fannin’s JMW Motorsport Ferrari avoided the pitfalls that befell other podium contenders to finish third despite starting eighth. The 488 ploughed on while the likes of Ben Green (Century, BMW) and Sam Neary (Team ABBA Racing, Mercedes-AMG) – who both found themselves third at various points – bore the brunt of several incidents. They were still sufficiently fast to complete the top-five ahead of Rollcentre Racing’s Morgan Short whose Mosler-inspired McLaren started 14th.

Such was the attrition that Andrew Watson (Garage 59, Aston Martin) and Tom Canning (TF Sport, Aston Marin) finished seventh and eighth despite serving penalties, while Bobby Trundley (Team BRIT, Aston Martin) and Jonny Adam (Beechdean AMR) both survived their own share of incidents to complete the top-10.

But two pre-race favourites failed to make the finish: Michael O’Brien was caught up in an accident that triggered a multi-car pile-up while looking good for a podium, and Team Rocket RJN team-mate Jenson Button was tagged at Old Hall on lap one which sent the 2009 Formula 1 World Champion spinning out of sixth place.

The attrition in GT3 was in stark contrast to the GT4 class where some of the world’s leading sim racers engaged in a largely clean race. Zansho Rocket Simsport’s Porsches locked out the front row – Luka Berk out-qualifying Jack McIntyre by just 0.063s – while the top-20 was covered by less than eight tenths.

McIntyre jumped his team-mate at the start and retained a comfortable advantage over the chasing Cayman, Florian Hasse’s Doerr Esports McLaren and the Huncfot Racing Alpine driven by Maciej Malinowski until the pitstops began.

Curiously, he resumed in fifth despite the pitstop only taking two seconds longer than those of his nearest rivals. Instead, Berk had restored his qualifying advantage to lead Malinowski plus Moritz Loehner and Nils Naujoks who’d both benefitted from the pitstop shuffle at McIntyre’s expense.

An errant GT3 car would end Loehner’s hopes, while his Doerr team-mate Hasse also failed to finish on a day when at least one of the McLarens should have featured on the podium.

Instead it was Naujoks who picked up the pieces, partly as the expense of G2 Esports team-mate Arthur Kammerer, to finish just 0.151s behind second place Malinowski. Like their fellow GT3 podium finishers, the top-three must carry Success Ballast at Snetterton next Sunday.

And that could play into the hands of McIntyre who showed race-winning pace despite only finishing fourth. He was chased all the way by Chris Hoeke who was quietly effective en route to fifth aboard the first of Rennwelten Pro Team’s Audis. Maxime Batifoulier (École Pilotage Virtuelle, Ginetta) charged from 14th on the grid to complete the top-six ahead of Ivan Shermetinskii (Jean Alesi Esports Academy, Mercedes-AMG) and Michael Kundakcioglu (SideMax Motorworks, Alpine).

The remaining 10 places are decided by four days of public Hot Lap Qualifying, which begin on Monday morning at 08:00 GMT. Register now at https://british.sro-esport.com/register