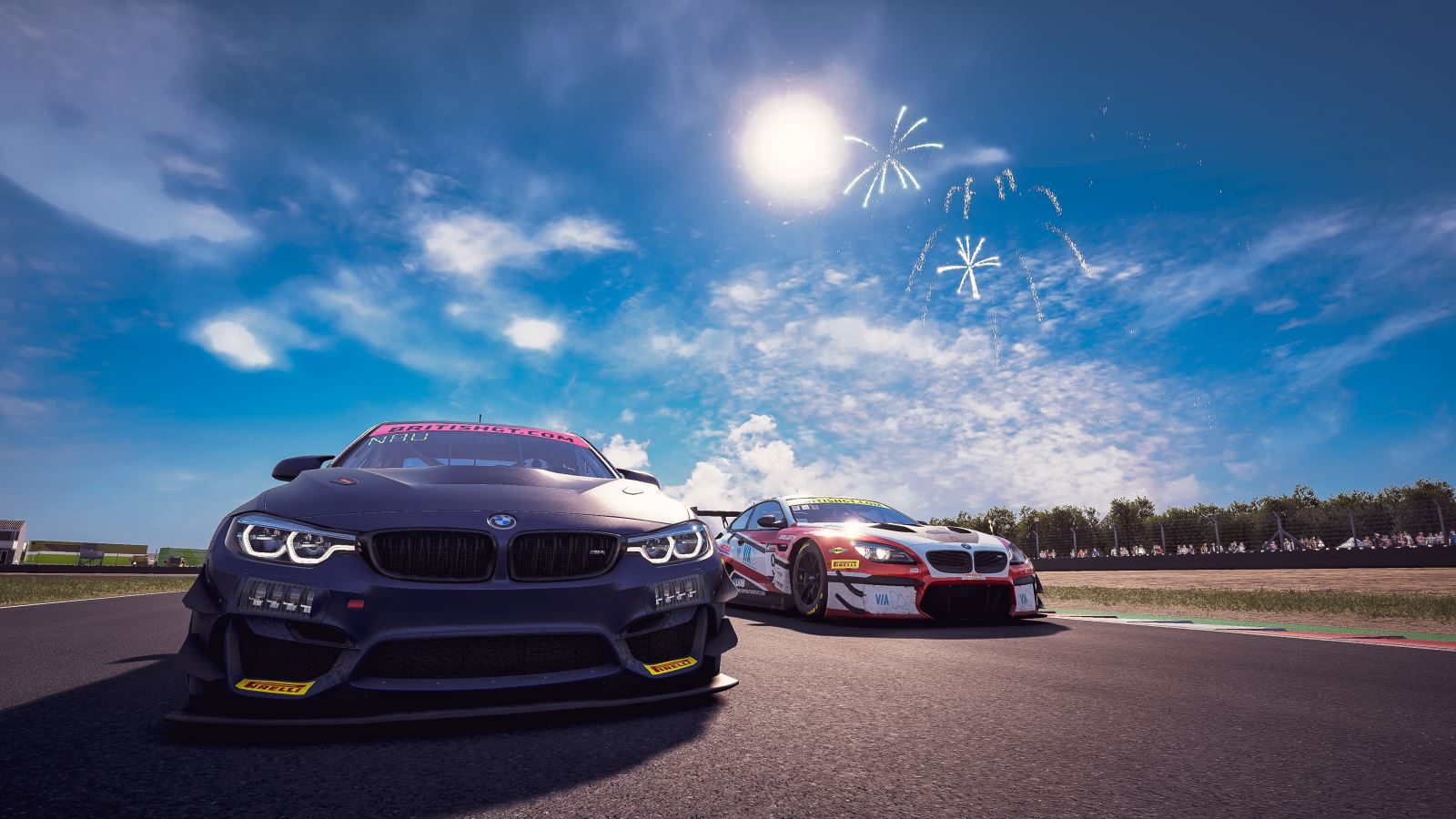 If a 10-point deficit and maximum Success Ballast weren’t enough, Jack McIntyre’s hopes of snatching the title suffered another setback when Nils Naujoks took pole position by just 0.03s in the dying moments of qualifying.

More significantly, that advantage had risen to 9.8s by the end of the 60-minute race…

Having safely negotiated the first corner, Naujoks eased away from Charlie Crossland and Robbie Stepleford, who soon had McIntyre – up one place from fifth on the grid – closing in fast. And when the front two made contact at the Melbourne Hairpin after 15 minutes, the Porsche was perfectly positioned to pick up the pieces.

By then Naujoks was six seconds up the road, a gap he’d extend by another four in time for the pit window to open after 25 minutes. McIntyre’s stop was considerably faster but the BMW still emerged with a handy six-second lead, which only grew further thereafter.

Indeed, the combination of the M4’s pace and McIntyre’s extra 30kg ensured Naujoks enjoyed a relatively calm run to the chequered flag, safe in the knowledge that he’d still be champion even if the pursuing Cayman somehow caught and passed.

Behind, a track limits infringement and subsequent drive-through penalty dropped Stapleford’s Aston Martin to eighth at the chequered flag. That gave Crossland’s Alpine an easier run to the final podium place ahead of Lucas Mueller in the second BMW and Doerr Esports’ McLaren driven by Moritz Loehner who wrapped up third in the final standings.

Tariq Gamil completed the top-six following a particularly entertaining squabble with Stapleford, albeit one that earned the latter his penalty.

But the day – and season – belonged to Naujoks who also receives an automatic GT World Challenge Europe Esports Championship entry as part of his prize.

No driver has pushed James Baldwin closer this season than Angus Fender. And with other esports commitments preventing GT3’s newly-crowned champion from competing at Donington, Century’s #9 BMW always looked the most likely chief benefactor.

That was underlined in qualifying when Fender – carrying an extra 10kg after finishing third at Silverstone – scorched to pole 0.5s faster than Michael O’Brien whose subsequent poor getaway instantly gifted the M6 a healthy headstart.

Soon, Fender was four seconds clear – a gap he maintained once O’Brien had worked his way back past Ben Green in Century’s second BMW and Barwell’s Sandy Mitchell who immediately copped a drive-through penalty for jumping the start.

But having stemmed the tide before the stops, O’Brien could do nothing about Fender’s pace thereafter, which ultimately resulted in the M6 claiming a second win of the season by 10.5s.

Jody Fannin did what Jody Fannin has done throughout this year’s esports championship: drive impeccably to pick up a strong result. This time JMW’s Ferrari came through from sixth to claim a third podium in four outings and third place in the final drivers’ standings.

His serene run was partly helped by the epic duel behind principally involving Bobby Trundley and Mitchell, who recovered from his earlier penalty to shadow Team BRIT’s Aston Martin for much of the final stint. But try as he might the reigning real-world champion could not find a way past the Vantage, which took the chequered flag less than 0.3s ahead after some first rate defensive driving.

The same battle also involved Green who pitted from third but resumed in seventh after changing tyres. His rapid progress was initially tempered by a resolute Trundley and Mitchell before an unsighted GT4 driver sent the BMW skittering across the Old Hairpin’s gravel trap.

The subsequent spin allowed TF Sport’s Tom Canning to complete the top-six after he was earlier dive-bombed by Trundley into the Melbourne Hairpin.