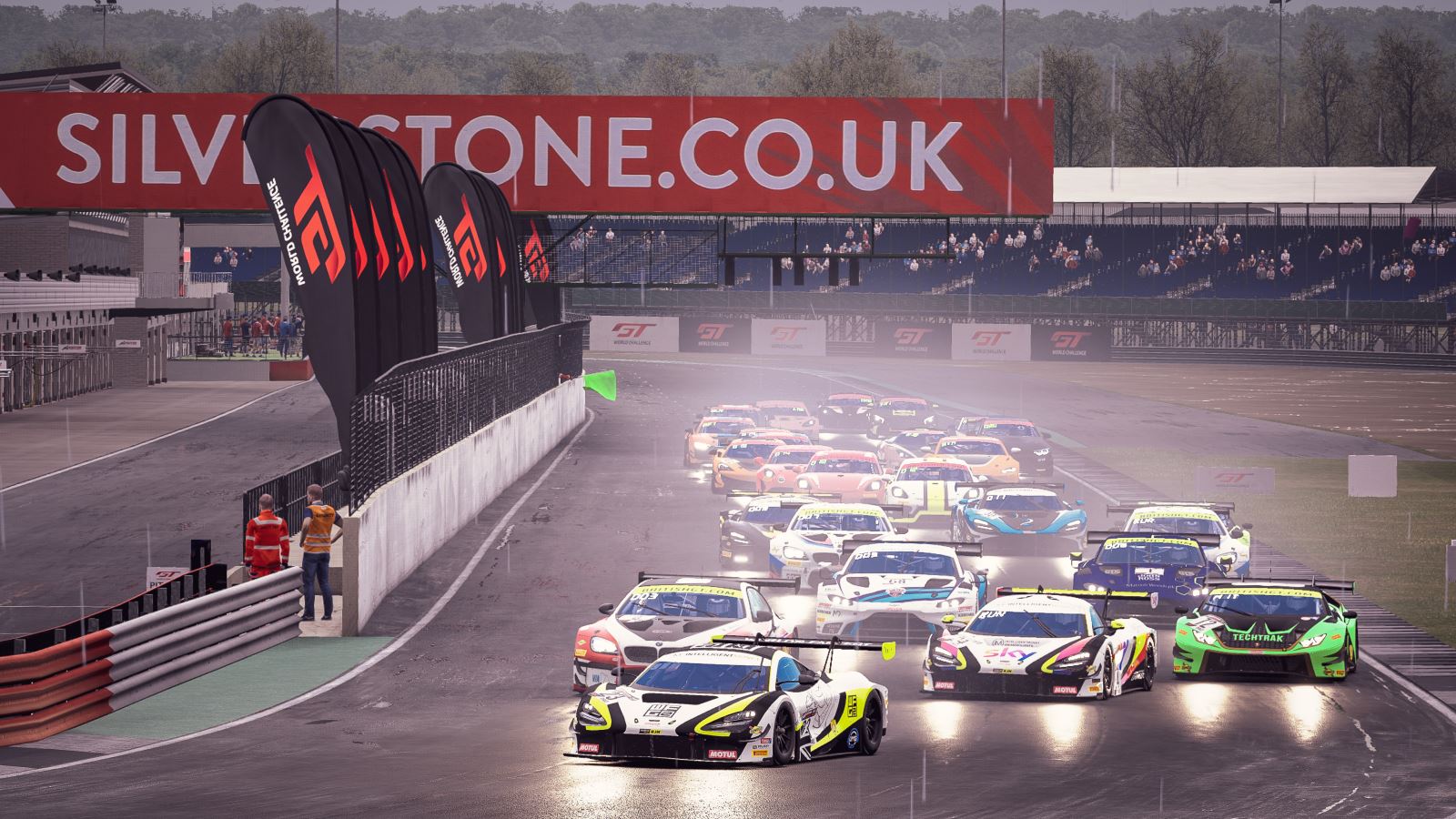 James Baldwin has won the 2021 British GT3 Esports Championship with a race to spare by claiming a dominant victory – his third in a row – at Silverstone this evening. Alex Buncombe made it a Team Rocket RJN 1-2, albeit 22.5s behind his team-mate, and Angus Fender completed the overall podium aboard Century’s BMW.

But the wait to crown this year’s GT4 champion will continue for another fortnight thanks to Jack McIntyre who reduced Nils Naujoks’ advantage to 10 points with a long-overdue victory. Tariq Gamil battled back from a slow start to finish second after surviving a late-race collision with Florian Hasse, while EGT Motorsports’ Pierre-Olivier Cloutier completed the class podium ahead of Naujoks.

GT3: BALDWIN WINNING IN THE RAIN

Come rain or shine James Baldwin has, predictably, been the GT3 driver to beat this season. And The World’s Fastest Gamer once again underlined his pedigree by converting pole position into a comfortable victory and the 2021 Drivers’ Championship.

Indeed, Team Rocket RJN’s #23 McLaren lead every second of every lap by pitting late in the window after building a sizeable advantage over title rival Angus Fender, Sandy Mitchell, Alex Buncombe and Bobby Trundley who swapped places throughout the opening stint.

Buncombe also started on the front row but was immediately relegated to second at Copse by Fender who needed to beat Baldwin to have any chance of taking the title fight to Donington. Instead, Century’s BMW warded off several attacks from Mitchell, who – along with Trundley – took advantage of Buncombe’s mistake after 13 minutes.

The RJN’s McLaren was back ahead of Team BRIT’s Aston Martin before the pitstops and duly re-took second through a combination of Mitchell’s drive-through penalty and undercutting Fender.

Tom Canning also jumped Trundley through the pit cycle and withstood the Aston Martin driver’s pressure immediately after re-joining to record his and TF Sport’s best result of the season in fourth. Ben Green couldn’t match Fender’s pace in the second of Century’s BMWs en route to a lonely sixth, while Mitchell’s drive-through for earlier contact with a GT4 car once again put paid to the real-world reigning champion’s promising performance. Fox’s Liam McNeilly completed the top-eight.

But there was no denying Baldwin who will now skip the season finale at Donington in two weeks due to other esports commitments.

Jack McIntyre had lead all three of this year’s previous British GT Esports Championship races without recording a victory. But that all changed at Silverstone where the Zansho Rocket Simsport driver took full advantage of Nils Naujoks’ maximum 30kg Success Ballast to narrow the deficit to 10 points with one round remaining.

Like Baldwin, McIntyre dominated from pole to finish 24s clear of Tariq Gamil who dropped from second to eighth in the early stages before successfully recovering the lost ground. Sixth before the pitstops, he emerged in third before engaging in a lengthy and entertaining scrap with Florian Hasse. The pair ran nose-to-tail and side-by-side over the final 15 minutes before contact between the pair – which was later deemed a racing incident by Race Control – sent the McLaren spinning.

A pitstop infringement for failing to take on the minimum one litre of fuel and impending 130s penalty meant the battle was somewhat academic despite the quality of racecraft on show.

Pierre-Olivier Cloutier also engaged in a particularly entertaining joust with Nils Koch before the latter pitted to serve a drive-through. The KTM’s fourth place would subsequently become a podium following Hasse’s spin and penalty.

But the real winner was, to some degree, Naujoks who once again made the most of the hand he was dealt. It says everything of the BMW Motorsport SIM G2 Esports driver’s consistency that fourth place – despite sustaining damage on lap one and carrying maximum Success Ballast – remains his worst result of the season. It also ensures the German races handicap-free at Donington where his only title rival, McIntyre, has the full 30kg handicap.

Samir Ibraimi recovered from being tipped around by a GT3 car to finish fifth in Rennwelten Pro Team’s Audi. But there was less luck for team-mate Chris Hoeke whose slim title chances were effectively ended after t-boning a stranded GT3 car at the start.

Elsewhere, Moritz Loehner’s championship chances were also dealt a fatal blow in the same lap one incident at Copse Corner that accounted for Hoeke.