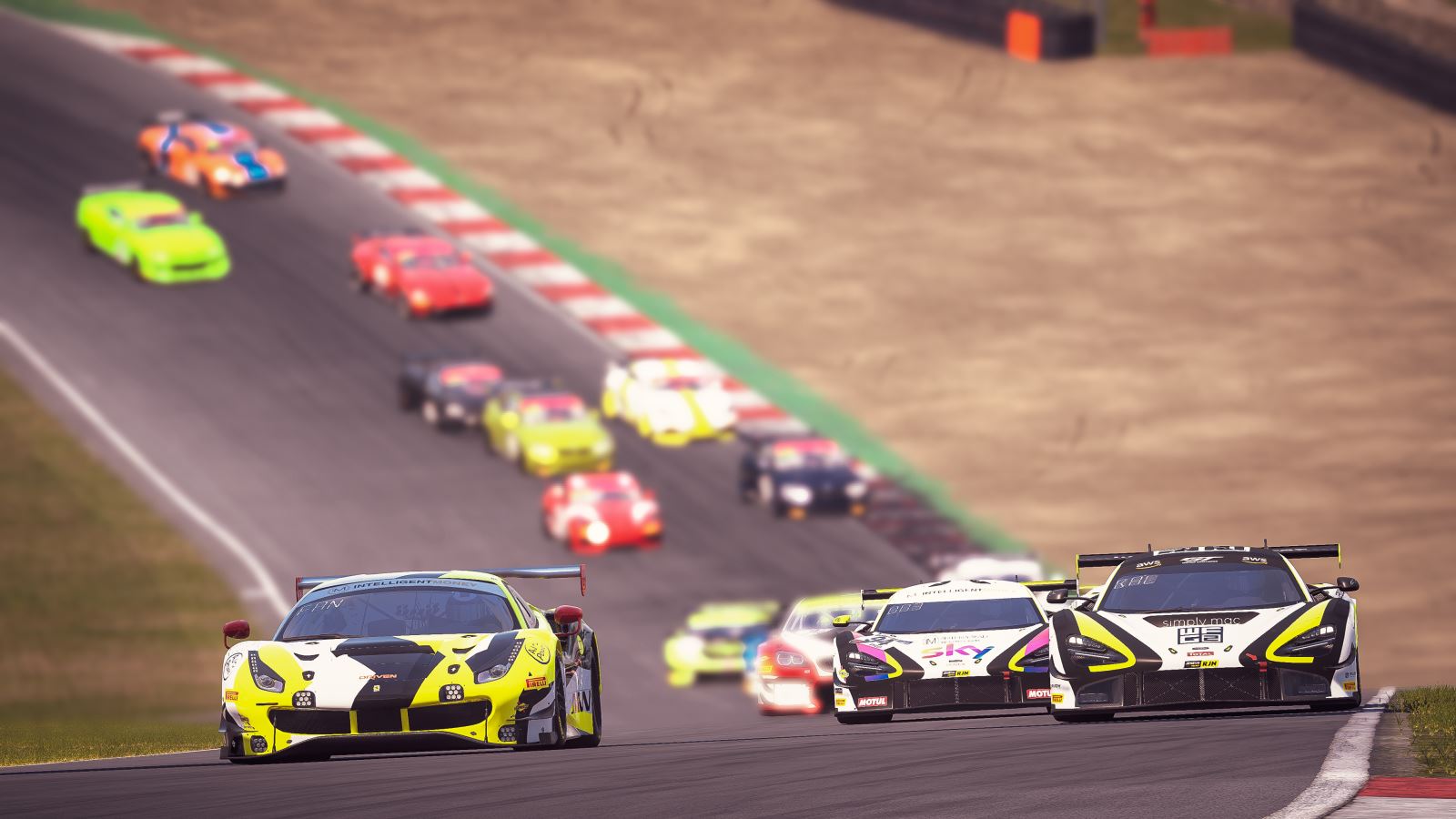 James Baldwin scored his second British GT Esports Championship victory in as many outings earlier this evening at Brands Hatch despite the best efforts of Team Rocket RJN team-mate Michael O’Brien and the McLaren’s maximum 30kg of Success Ballast.

In GT4, a first win of the season – but third class podium in as many races – leaves Nils Naujoks out front on his own in the drivers’ championship. Doerr Esports’ McLaren driven by Moritz Loehner pushed the M4 hard, while BMW Motorsport SIM G2 Esports enjoyed a 1-3 thanks to Gregor Schill.

James Baldwin extended his championship lead by fighting back from fourth place with his fully ballasted McLaren.

The extra 30kg did little to slow The World’s Fastest Gamer in qualifying where JMW’s Jody Fannin claimed his first pole position of the season by a tenth from Baldwin and Sandy Mitchell who encountered a technical issue that subsequently forced Barwell’s Lamborghini to start from the pitlane.

That left the way clear for Michael O’Brien to pass Baldwin before the end of lap one and then relieve Fannin of the lead next time around at Graham Hill Bend. His advantage stood at five seconds before the pit window opened after 25 minutes.

Behind, Team Rocket RJN’s third McLaren driven by Alex Buncombe also managed to pass Baldwin during the opening lap skirmish. Their ensuing battle swung back in the latter’s favour after 15 minutes before both reeled in JMW’s Ferrari. They arrived just as the pit window opened and duly stopped at the first opportunity in an effort to undercut Fannin.

Baldwin’s stop – the fastest of all in GT3 – and out laps were sufficient to do just that, whereas a slow stop relegated Buncombe to the midfield.

A short while later O’Brien re-joined 2.5s ahead of Baldwin who gradually chipped away at his team-mate’s advantage. Soon the pair ran nose-to-tail in an exhibition of esports racecraft, O’Brien somehow covering whatever Baldwin threw at him. That was until, with 13 minutes remaining, O’Brien braked a fraction late for Stirlings, which allowed Baldwin to draw alongside. The race-winning pass was completed before Clearways.

The pair remained together for the rest of the race, Baldwin taking the chequered flag 1.2s ahead after O’Brien briefly reduced his arrears to 0.5s.

Behind, Fannin once again proved the master of consistency by avoiding penalties to finish third. However, his pole position and four-second deficit to the top-two suggests he now also has the pace to genuinely challenge.

Fourth place swapped hands several times over the closing laps and was ultimately decided post-race when Angus Fender’s five-second penalty promoted Morgan Short to fourth. Rollcentre’s McLaren enjoyed a quietly effective race after starting sixth whereas Century’s BMW overcome a spin before the pitstops and an instruction to hand a position back to Bobby Trundley before winding up fifth.

Trundley (Team BRIT, Aston Martin) might also have benefitted from Fender’s five-second handicap without the 30s he received in lieu of a late drive-through penalty that instead elevated Mitchell to sixth following the reigning real-world champion’s storming comeback.

GT4: NAUJOKS PILES ON THE PRESSURE

The Porsche of Tariq Gamil ensured that a Hot Lap Qualifying pace-setter claimed pole for the third time running but was soon passed by fellow front row starter Naujoks and Moritz Loehner who stormed from fifth to second in the opening laps.

Up front, Naujoks emerged ahead of Loehner, albeit with a reduced advantage following a small error in the pitlane. For a time Doerr’s McLaren looked capable of challenging the BMW but was unable to mount a serious attack before the M4 edged clear to a 1.9s victory.

Schill came home 14s behind after keeping Robbie Stapleford at bay. Profile Racing’s Aston Martin qualified 10th but was up to sixth before the pitstops and picked up further positions by stopping earlier in the window than most of the other frontrunners.

Gamil crossed the line less than two tenths behind but comfortably ahead of Snetterton winner George Boothby whose SideMax Motorworks Aston Martin carried the full 30kg of Success Ballast.

All of that leaves Naujoks 22 points ahead of Boothby, while McIntyre is now a point further back in third.