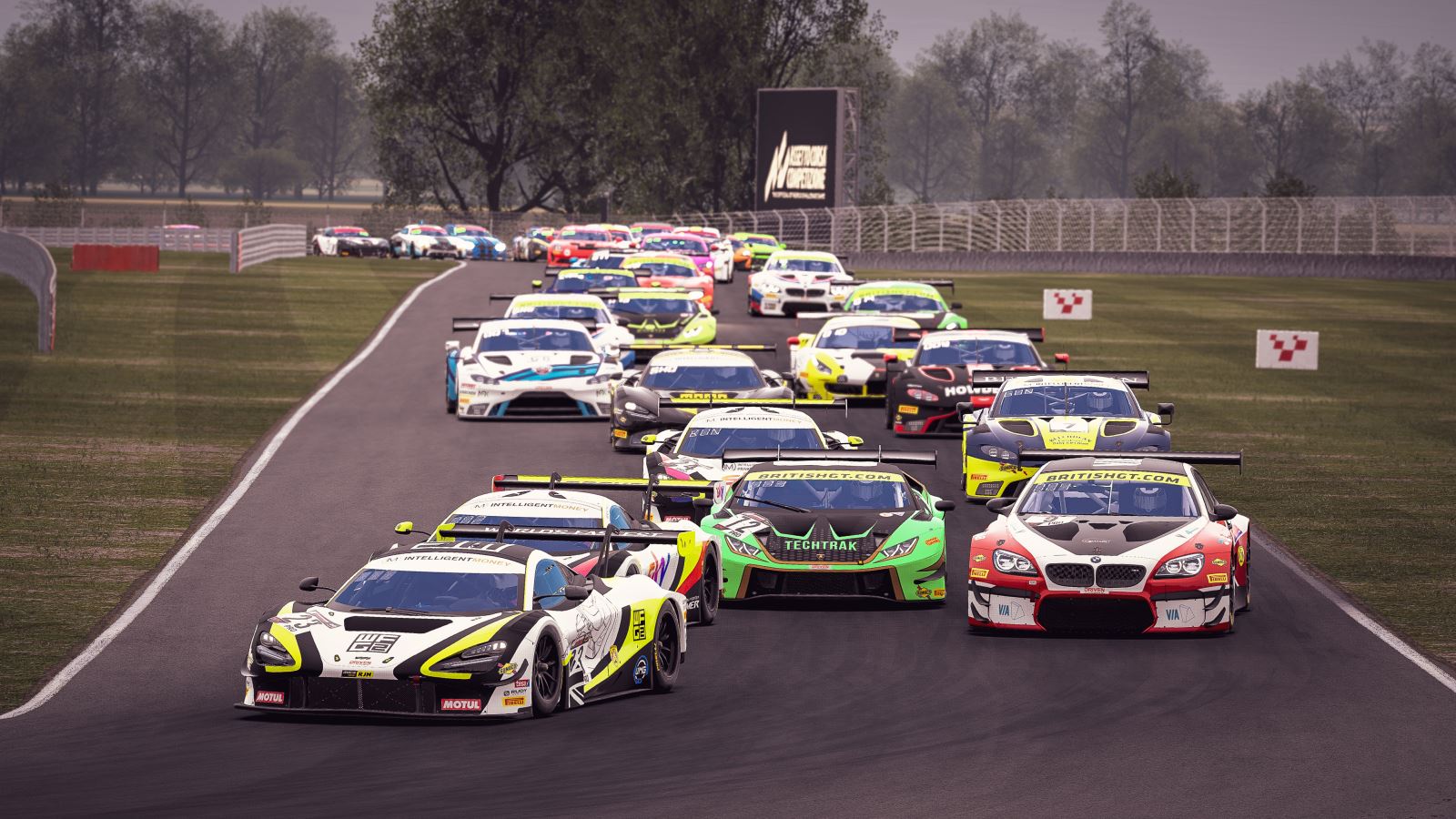 The World’s Fastest Gamer lost the lead at the start but never looked back after passing O’Brien halfway through the opening stint, while Ben Green surged from 11th to salvage a podium for Century Motorsport on a tough night for team-mate and erstwhile championship leader Angus Fender.

James Baldwin only claimed pole by a tenth from Michael O’Brien but ended the hour-long race 23s clear of his McLaren team-mate after recovering from a half-spin on lap one.

The tight Melbourne right-hander is frequently the scene of drama at Snetterton, and so it also proved in the virtual world where slight contact between Team Rocket RJN’s front row starters helped O’Brien end lap one in the lead.

But that was nothing compared to what happened behind where Barwell’s Sandy Mitchell sent Angus Fender spinning out of third, which forced others into avoiding action and separate incidents. The upshot was, briefly, a Team Rocket RJN 1-2-3 until Al Buncombe compounded his grassy moment at the start of lap with a drive-through penalty for jumping the start.

O’Brien led Baldwin for a while but, nursing performance-sapping damage, was powerless to keep his team-mate at bay for long. Six seconds separated them before the pitstops, which eventually extended to more than 20.

The action behind was typically frenetic as the likes of Ben Green, Andrew Watson and Jody Fannin initially scrapped over the final podium place. The BMW driver’s pace ultimately proved decisive once he was able to break clear of the chasing pack before the pit window opened.

Morgan Short backed up his sixth place at Oulton with fourth at Snetterton, Rollcentre’s McLaren once again avoiding the pitfalls that befell others to progress from eighth on the grid. Fannin, too, was typically consistent en route to fifth in JMW’s Ferrari after starting 10th.

It was a measure of the number of penalties dished out that Mitchell completed the top-six despite serving a drive-through for tipping Fender around on lap one. That early incident denied another potential showdown between Baldwin and Century’s Oulton Park-winning BMW, which fought brilliantly back into contention before a late drive-through condemned Fender to eighth.

Instead, 14-year-old Liam McNeilly impressed on debut to take seventh for Fox Motorsport, while a promising result for Team BRIT’s Bobby Trundley was dented by Fender’s late contact. The Aston Martin came home ninth, one place ahead of Ross Gunn who dropped from seventh to 10th following a 30s post-race penalty in lieu of a drive-through.

Baldwin now leads Fender by 14 points ahead of next Sunday’s race at Brands Hatch, while Green is just two points further behind in third.

For the second weekend running Hot Lap Qualifying’s pace-setter also took home GT4’s virtual race winner’s trophy. And, just like the rest of the top-10, an invitation to compete at Brands Hatch next Sunday.

With Jesus Sicilia unable to capitalise on his pole position, it was Boothby and McIntyre who made the early running instead. Together the pair pulled clear of the chasing pack and were nose-to-tail before the bright pink Vantage pitted soon after the window opened.

But just like last weekend Zansho Rocket Simsport’s Porsche lost ground through the pit cycle and resumed in third behind Naujoks, whose additional 10kg of Success Ballast for finishing third at Oulton couldn’t prevent the BMW Motorsport SIM G2 Esports driver from climbing to second after starting sixth. Lap after lap McIntyre shadowed the M4 only for Naujoks to cover every potential move. That was until the final tour when Adam Morgan’s slowing GT3 car – which had run out of fuel – presented the Cayman with an opportunity to pounce.

The resulting switch now sees Naujoks and McIntyre tied on 30 points – five more than this year’s race winners Boothby and Luka Berk who failed to score after starting fifth.

Michael Kundakcioglu (Alpine) backed up SideMax’s good day by adding fourth place to his eighth at Oulton after a largely trouble-free run. And Moritz Loehner can also be pleased to have points on the board after losing a promising result seven days ago. His Doerr Esports McLaren finished ahead of Egor Ogorodnikov’s LADA Sport ROSNEFT KTM and Chris Hoeke’s Rennwelten Pro Team Audi, which completed an unbroken string of seven different manufacturers.